The Peace Talks that President Johnson initiated, however, quickly revealed that the two sides were far apart and the night the sappers penetrated our base the Talks were stalled. Our country had ceased bombing North Vietnam as a concession to further the talks and President Nixon urged the North Vietnamese to respond in kind.  He was willing to tone down our end of the war and he urged them to do the same.  President Nixon’s position, essentially, was that both sides should slow down the fighting and each should begin staged withdrawals from South Vietnam.  When the North Vietnamese did not accept President Nixon’s proposals, our negotiators accused them of not negotiating in good faith.  North Vietnam responded by increasing their attacks.

North Vietnam also wanted peace, but they were not willing to settle for anything close to our terms.  It appears North Vietnam’s leadership believed that stepping up attacks would not only apply more political pressure on President Nixon but also further their objectives in Paris.  I believe North Vietnam’s increased attacks and specifically the attack against Dong Ba Thin was meant to be a very dramatic statement that they were not leaving South Vietnam.  It was meant to be a shout to President Nixon that the Peace Talks would not bring peace until their objectives were given more consideration.

First, a little bit of background:

President Lyndon Johnson was in office during most of the war’s escalation.  In a moving speech, he declined to run for a second term in the 1968 elections.  His stated reason for not running was that the Vietnam War was too divisive, so in the country’s best interest he would not seek a second term.  Candidate Richard Nixon promised he would seek peace and he said he had a secret plan to accomplish it.  President Nixon won the election and at his inaugural address, he stated “The greatest honor history can bestow is the title of “Peacemaker.”’  President Nixon sincerely wanted to be that peacemaker.  When he won the election, it seemed peace was on the horizon.  I remember that while I was in Basic Training, my father told me he believed the war would be over in a few months.

During a recent conversation with General Laws, he mentioned that the Paris Peace Talks were an important consideration of North Vietnam when they developed their military strategy.  I hadn’t before considered that as a possible reason for the attack.  I now think General Laws hit upon the exact reason why the sappers were trying to kill General Morris.  The North Vietnamese were trying to make a dramatic statement that would affect their leverage in Paris. 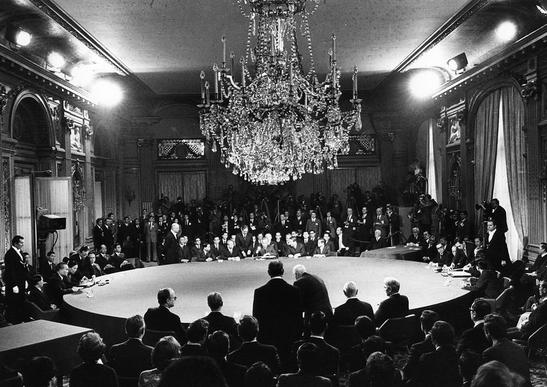 Maybe Symbolic of How Far Apart They Were