Until recently, I didn’t learn much else about that night.  The intelligence work was done off base and we were not privy to their findings or their conclusions. Because of the risk that information could be overheard and relayed by Vietnamese spies who worked at our base, Army Intelligence personnel severely limited disclosure of any news regarding the attack.  The Army had a firm policy of providing information on a “need to know” basis only.  We did hear rumors, however.  As I look back now it seems pretty clear that Specialist Swearenger was granted knowledge individually that the rest of us weren’t.  I recall him saying that a “little bird” told him the sappers intended to kill General Morris.  He was also aware that there were regiments of NVA fighting the 4th Infantry in the mountains within 30 miles of our base and it is now widely known that was true and that hundreds of enemy were killed in two major battles.

During the past 47 years I have thought about that night a number of times.  Recently I discovered a 3 page memorandum written by the 183rd company clerk, Marcus Mitchell.  In that memorandum, Marcus stated that while he was helping sweep the perimeter early on the morning after the attack, he personally "recovered an enemy Bangalore torpedo w/blasting cap which had 75 cakes (about the size of a bar of soap) of C4 lashed in with vines."

​Specialist Jim Benoit, the same soldier who disturbed the sappers with his “vocal performance” in the shower, was on the sweep with Marcus.  I called Jim at  his home in Florida, and he told me that the Bangalore  Torpedo was five or six feet long and about six inches in diameter.   Marcus and Jim 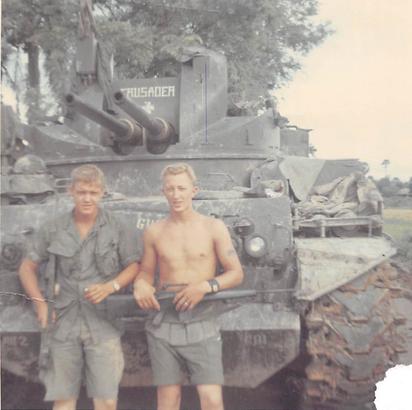 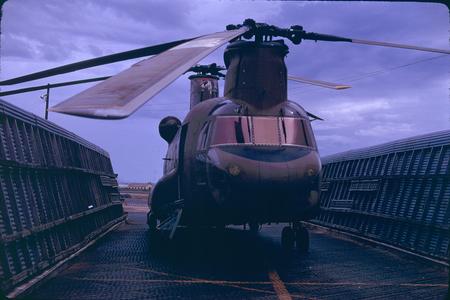 The Bangalore torpedo was armed with a blasting cap and was ready to make just one very big uncontained explosion.  If it would have been placed under General Morris’ mobile home, more of the blast would have been focused laterally, causing even more death and destruction. It would have turned our General’s mobile home, as well as two other mobile homes, one on each side of him, into thousands of shards of shrapnel.  Its design and purpose was anti-personnel.  It was meant to kill soldiers.  Many soldiers.  A friend of mine, Tony Lawson, who spent 3 tours in Vietnam as a combat engineer and personally worked closely with C-4, told me that bomb would have done damage approximately 400 feet away from its point of blast.  Tony said it would definitely have taken out our entire officer’s area and would have most likely killed or seriously injured all 53 officers.  In addition, all of my company's 225 enlisted men were also quartered at a distance within the bomb's reach.

General Laws, who certainly has extensive Army education and training to make the comment, said to me,

"That bomb would have taken out our whole officer’s area."

The sappers smashed down grass a hundred yards to the right of my tower. General Morris and 52 other officers were sleeping a hundred yards behind my tower. The sappers had a bomb big enough to flatten half a city block. The only way these facts can be reconciled is to conclude that the sappers’ intention was to enter our base a hundred yards from my tower, then use their Bangalore Torpedo against General Morris and our other 52 officers.  Moreover, the attack received an inordinate amount of attention from the highest command levels of the U.S. Army.  Intelligence from Cam Ranh Bay questioned me and others.  General Laws, with whom I spoke with recently, informed me that the nearby Vietnamese village was searched and two Vietnamese women who worked as maids on our base were incarcerated as a part of that investigation.  General Laws said that CID (United States Army Criminal Investigation Command) also did an investigation.  It is unusual for CID to investigate enemy attacks, since enemy attacks are not normally considered a criminal act.

​The sapper’s mission, it appears, was to attack my company’s officer quarters with their Bangalore torpedo.  There was no other target at Dong Ba Thin that would warrant the use of such a powerful bomb.  Such a weapon would not have been useful against our base’s helicopters or airplanes since each was protected by an individual revetment. A revetment was shaped steel and concrete housing that surrounded each aircraft.  A revetment was designed to deflect a blast into the air so that the damage from an explosion would be contained to the area inside the revetment. This huge bomb would have taken out only one aircraft in one revetment so, certainly, it was not meant for that purpose. 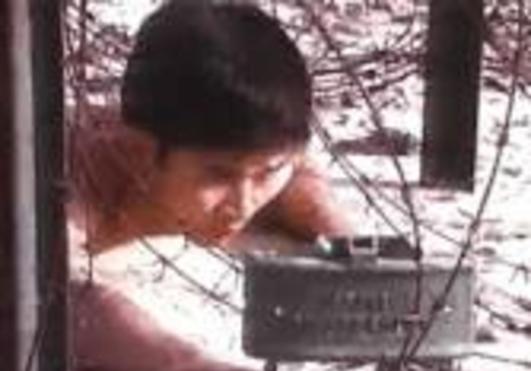 A sapper stealing a Claymore!
They were brave soldiers. 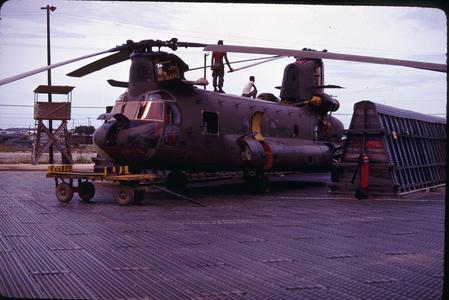 The sappers waited for me to sit down, or at least not be as diligent with my starlight scope, for the five minutes they needed to cut through our wire and crawl the 100 yards across our perimeter. We knew the enemy often watched us from the elephant grass and were aware of our habits. They expected me to sit down, or at least not be using my Starlight Scope the entire hour and a half.  When I didn't conform to their expectations, they changed their plan and came in 20 feet to the west of the 183rd tower. They were on the dark perimeter road heading my way when Specialist Benoit startled one of them.

Butch Graef was shot at with flurries of AK-47 fire and grenades were thrown at him.  Both of Butch’s fellow guards were wounded.  It took great courage for Butch to not lie on the tower’s floor and wait.  Instead, Butch faced the sappers and shot back, wounding their leader.  The wounded leader slowed the sappers down and that is why our helicopters found them - before they could get to their motorcycles and disperse into the nearby village or the mountains.  If Butch had not wounded the sapper’s leader, I believe that all of the sappers would have escaped and they would have taken their Bangalore Torpedo with them.  With a bomb that extraordinary and a plan that big, they would have been back.  Butch Graef’s courage, in my opinion, is the primary reason that we did not later suffer the devastating attack that was thwarted that night.  Butch was awarded a Bronze Star and he deserved it.  Maybe he deserved a Silver Star.  While doing my research, I learned that Marine Specialist 4th class Michael John Fitzmaurice earned a Medal of Honor for his actions during a sapper attack!

A number of things went right that night.  I was a new guard playing with a Starlight scope and I didn't sit down.  Specialist Benoit disrupted the sappers while taking a late shower.  Most importantly, Specialist Graef heard the round chambered and put a spotlight on one of the sappers.  If even one of those would not have happened, the sappers would have made it to our officers’ area, and this narrative would have unfolded quite differently.  I believe three of the rocket launchers the sappers brought with them were still manned by sappers hiding near each tower in the grass outside the perimeter. The investigators told me that one or two had been hiding directly in front of my tower. We know that only 7 sappers entered the base, but 10 were killed, thus at least 3 stayed outside with rocket launchers to knock out the towers if needed. The three towers would have been hit seconds after the big explosion.  It is likely that General Morris and most or all of the officers, along with many enlisted men, including several guards, would have been killed.  We would have been casualties in what would have been the biggest story to emerge from Vietnam in 1969.

And, it would have been a very big story; it would have been one of the top ten tragedies of the entire war (www.g2mil.com/lost_vietnam.htm)  The Vietnam War, for the most part, was a war of small battles, skirmishes, and ambushes.  Early in the war the enemy realized they could not compete with us in large battles because our firepower was far too massive when we cornered them in big fights..   Our infantry would quickly surround the enemy, cut off escape routes, and then call in massive air power and artillery.  Even the major battles did not often cause large losses of American soldiers.   The smaller battles added up and killed more than 58,000 Americans, but they were not individual headline grabbers.

I know of only one other attack where such a large bomb was planted to kill sleeping Americans – the February 10, 1965 attack against a hotel near Qui Nhon when 23 American soldiers died.  Twelve generals and one admiral died during the Vietnam War, but none died in his own bed.   Seventy-five percent of the soldiers in Vietnam were stationed at bases.   Our loved ones, tens of millions of voters, thought we were relatively safe, and we were.  An attack that killed so many of us at a base would have greatly alarmed them.  It would have had a very negative political effect on Nixon, and it would have stayed in the headlines for weeks.

Tony Lawson, on left, was awarded three purple hearts throughout three tours in Vietnam as a combat engineer and sniper

are both adamant that they and three other solders personally found the Bangalore Torpedo, and that it was a monster.  Jim recounted that they performed the sweep with an off-base Infantry captain, who it appears, took the torpedo to Cam Ranh.

To understand what happened that night, we must answer the central question of what the sappers were intending to do with a bomb that powerful.  Although North Vietnam did have limited supplies of another plastic high explosive, it is my understanding they did not have the capability to make their own C-4, and that any they did have was stolen from us.  Our Claymore Mines were filled with C-4, and the enemy would sometimes sneak up on our positions, cut the wires to the mines, and steal them.  That is how bold and brazen they were.  A weapon containing 75 cakes of C-4 was an armament of nearly immeasurable value that surely had an extraordinarily important purpose.

243rd Aviation Chinook in One of Dong Ba Thin's Reventments